A quick introduction and knowledge I gathered from doing research on the country.

Switzerland has a very unique and interesting history. It is surrounded by 5 countries; Germany, Austria, Liechtenstein, Italy, and France speaking predominantly German throughout the country. However, we found that many people speak 3 to 4 languages. Even in the small ski towns, the servers in restaurants speak so many languages. To me, this is mind boggling growing up in the USA which typically speaks one language.

Historically, Switzerland was found under the Christianity era which rose from the Roman Empire. During the 13th century, two very rich families came to rise to create the Oath of Allegiance making it an independent Swiss state. In 1477, Charles of Burgundy of France was defeated by the skilled mercenaries who were paid well to fight the battle. Fast forward, 1864 is the year that the International Red Cross was formed to help those during a crisis. Instead of going to war, they decided to concentrate on their economic development, finance and pharmaceutical sectors making the country a very bountiful one. Furthermore, the anticipation and excitement we had for exploring the country was opulent.

We flew into Zurich Airport or also known as, Kloten Airport. Rented a car so we could gawk at the lush green rolling hills and stare in disbelief at blueish-green lakes surrounded by engulfing snowy peaks. This is how we wanted to explore the Swiss-Alps. The views were nothing short of sensational. We observed the number of tunnels you have to drive through making the country accessible. The immature people that Brian and I are, we would laugh every time we saw an “AusFahrt” aka exit sign. 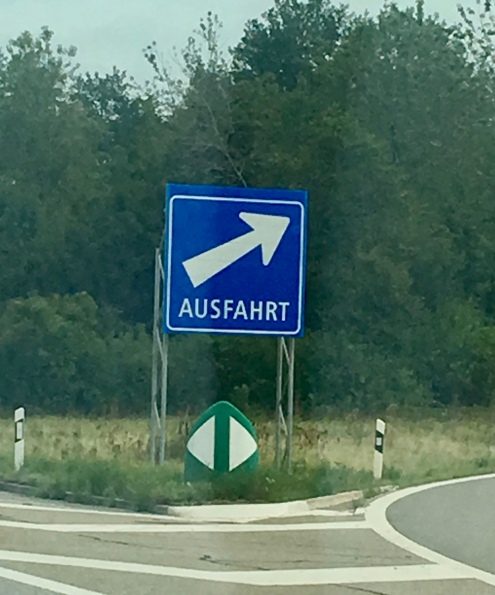 Navigating through Lucerne, Interlaken, and Lauterbrunnen was quite fascinating. We had to park the car at the base of Lauterbrunnen Rail Station in order to continue onto our final destination up to Wengen. It’s a car-free town that takes about 14 minutes by a cogwheel train straight up the mountain, from Lauterbrunnen up to Wengen. In this niche, you are completely surrounded by waterfalls. The stunning views will completely transform you into a different dimension and let your worries melt away, allowing you to be present to enjoy the beauty this world has to offer. 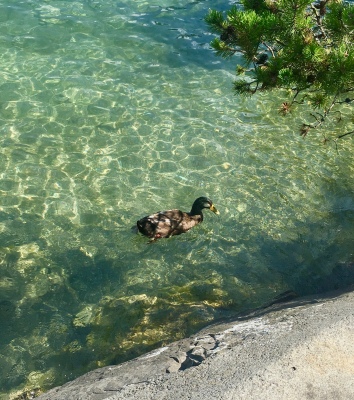 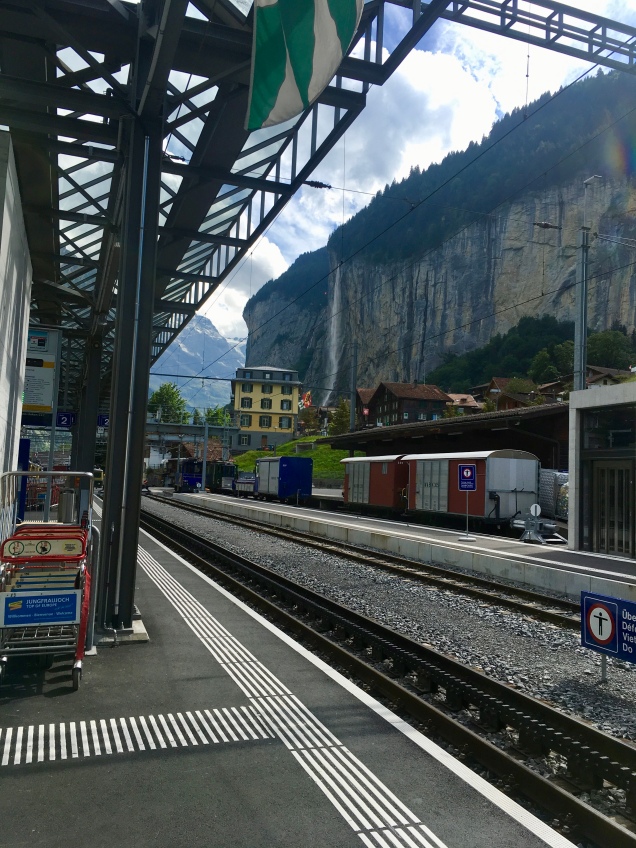 We stayed at Hotel Residence Brunner which was a typical 70’s ski resort hotel. The room was okay but the balcony view was outstanding. We got the impression that was standard in the town so I wouldn’t have high expectations when you go to visit. It is one of the further hotels from central town with a short hike up the hill but being summer it wasn’t bad. 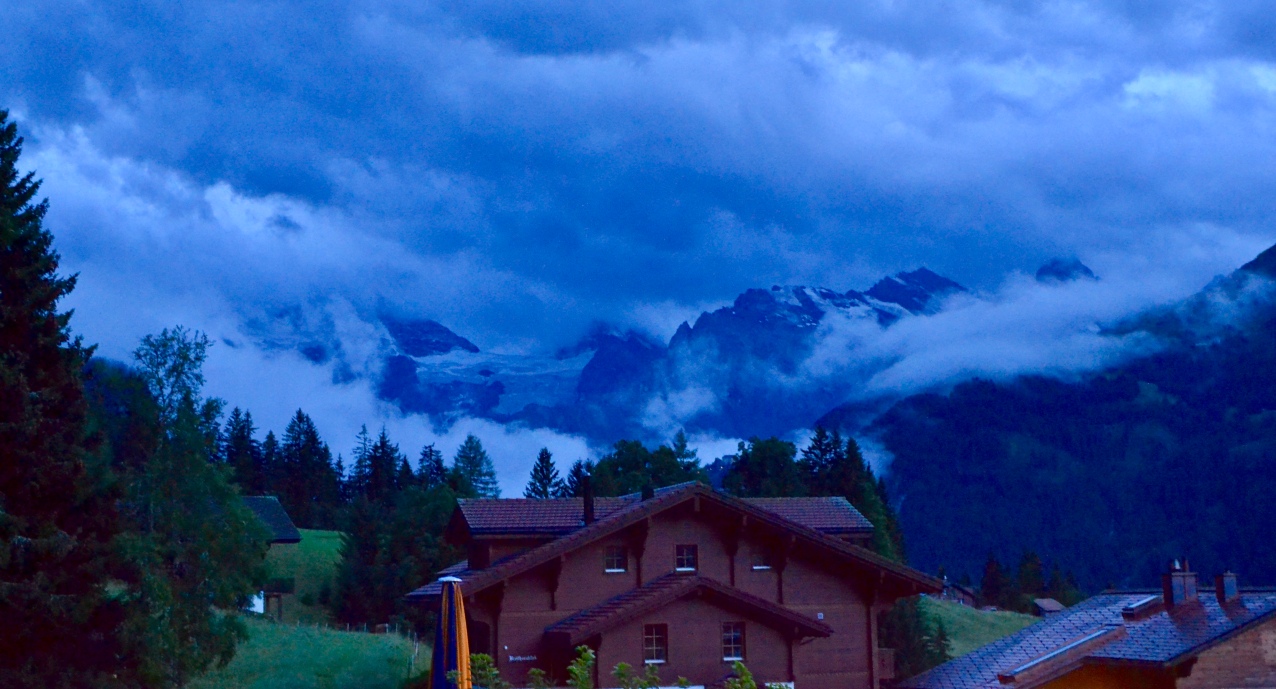 It was so nice to wake up each morning with the ability to look out the window and appreciate another day in life I’ve been blessed to live. This was the first time I missed living in the United States. I missed the fresh clean air we breathed in the Colorado Rocky Mountains and all the hiking trails that were so close to our doorstep.

On this very morning, much to our surprise, we encountered cow’s mooing right outside of the room. So naturally, we decided to get out there and feed them. I have never seen a group of cows mow a lawn so quickly! It was truly incredible. The owner just moves them from one parcel of land to the next by putting stakes in the ground wrapping twine around each stake marking a section of land for the cows to stay confined. It’s interesting to see that the cows will not breach the twine parceled piece of land. However, when the grass has been tapped out, they will all become very vocal mooing like crazy. 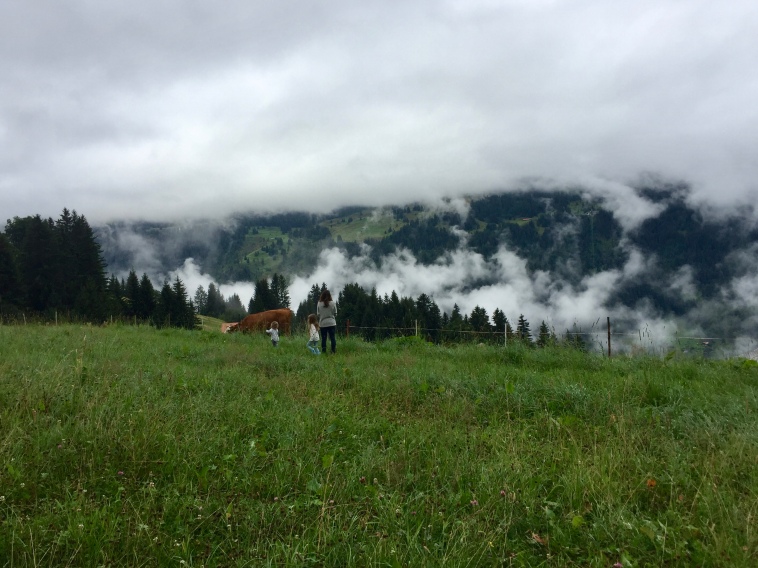 We spent most of the day exploring the area and took the cogwheel train up to the tip top where we par took in cheering on triathlon athletes and enjoyed some lunch for the afternoon.

The whole town of Wengen is surrounded by waterfalls. It was really neat to be able to hike so close to the mountains feeling like the luckiest people in the world. Heavy clouds moved in and out of the area so it was hard to get pictures but experiencing it was surreal. We were so grateful for the clean air and silence.  It was nice to take a break from the city life. 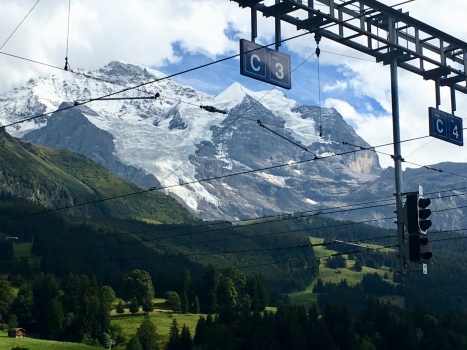 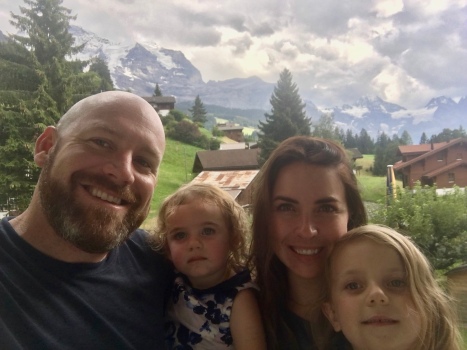 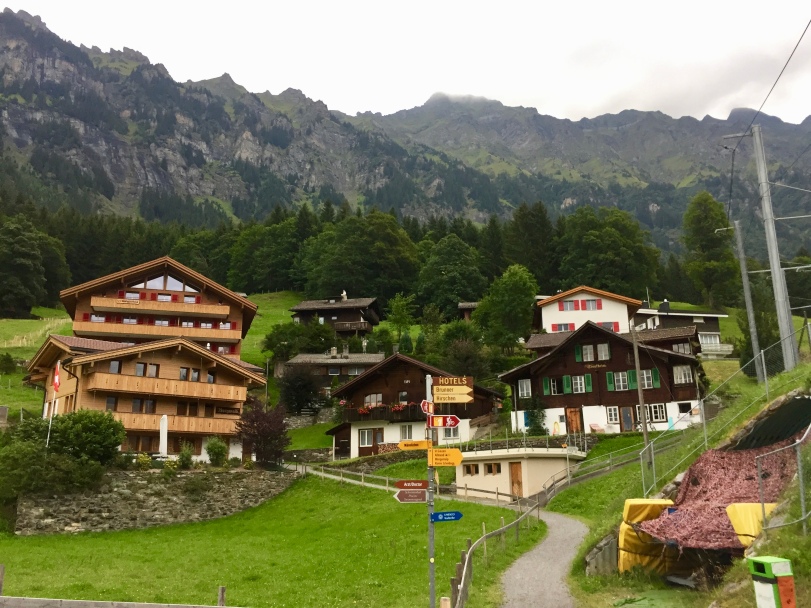 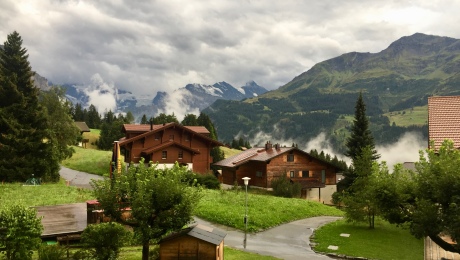 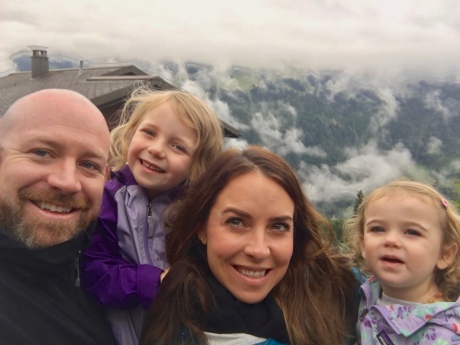 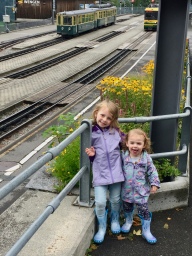 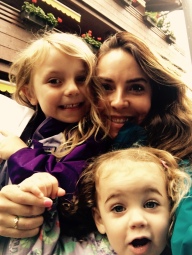 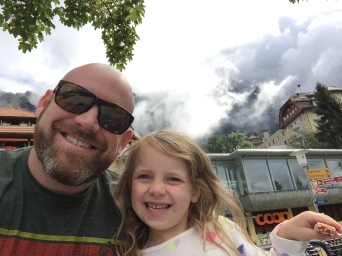 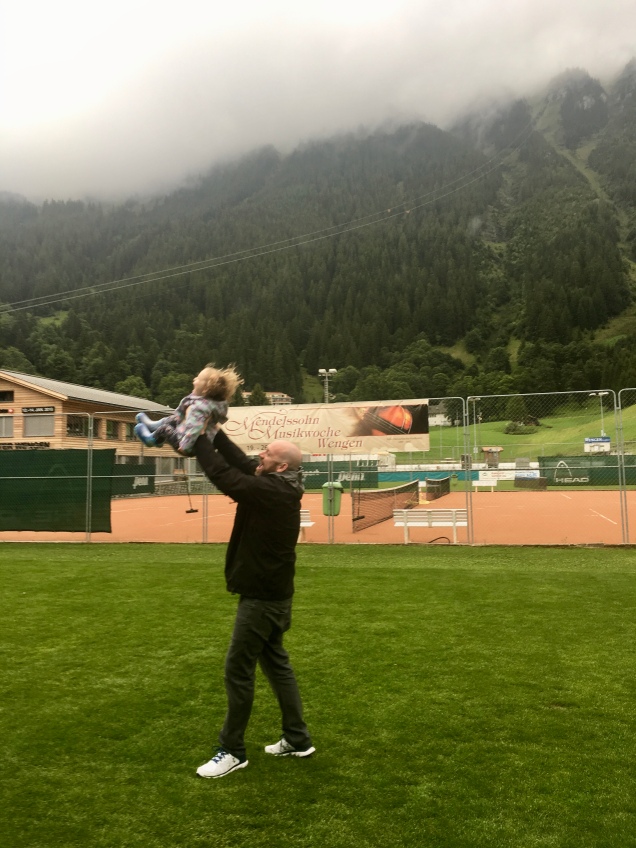 Hiking around our hotel

The trip to Jungfrau, “Top of Europe” was the highlight of our trip to Switzerland. We took the train from Wengen to Kleine Scheidegg and then hopped on the train to Jungfraujoch. It stands 3454 meters or 11332.02 feet tall, Europe’s highest altitude by a railway station. This Jungfrau observatory is the international research station is called Sphinx Observatory. It climbs 108 meters in 25 seconds. You feel a lot higher up than you think due to the vertical climb. The observatory station has a great tour for the whole family to enjoy. The Sphinx Observatory deck view extends as far as the Vosges mountains in France and Germany’s Black Forest. The sight on top of the peak was memorable, and we will never forget it.

We continued through the observatory as a self-guided tour (in my opinion, no need to pay for a guided tour for this particular attraction). Our first stop was a 360-degree panorama film, a collaboration of pictures taken 365 days out of the year put into a film, which immediately immerses you into a day in the life at Jungfrau. The clouds swoop in around you while you stand there in awe. They continue to circle around you capturing the incremental changes that happen during the day and nights of Jungfrau. It exceeded our expectations. 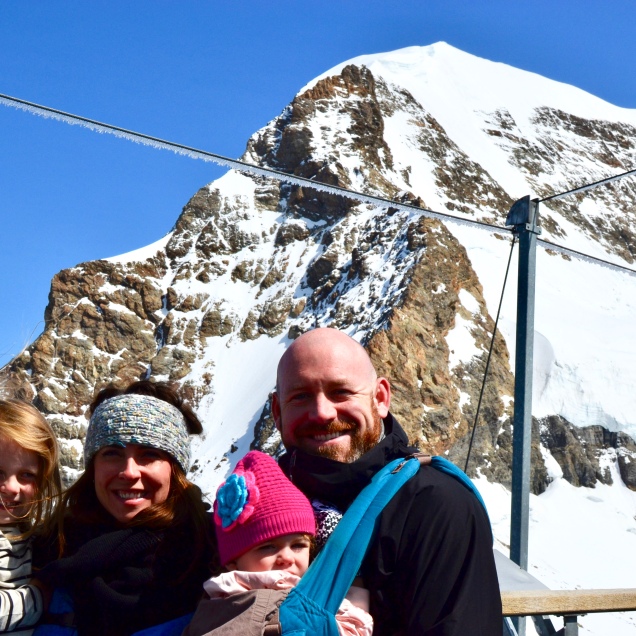 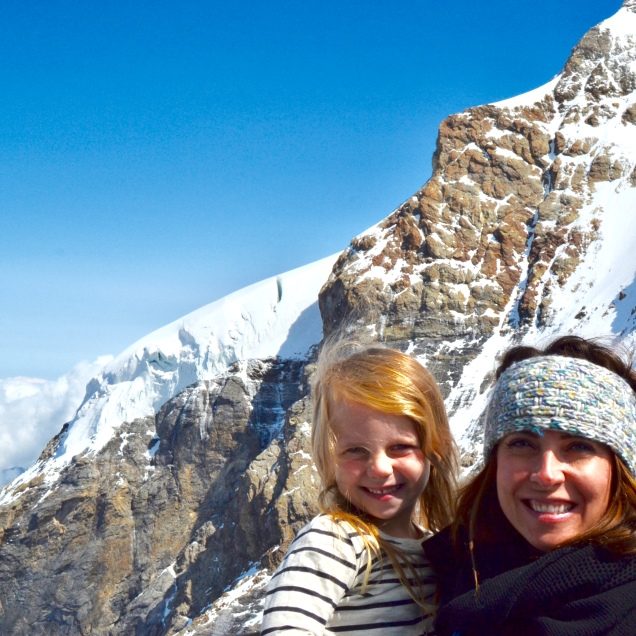 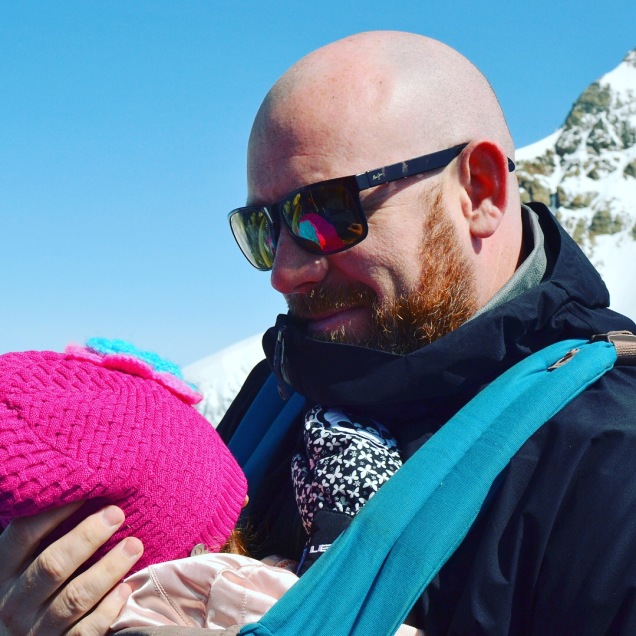 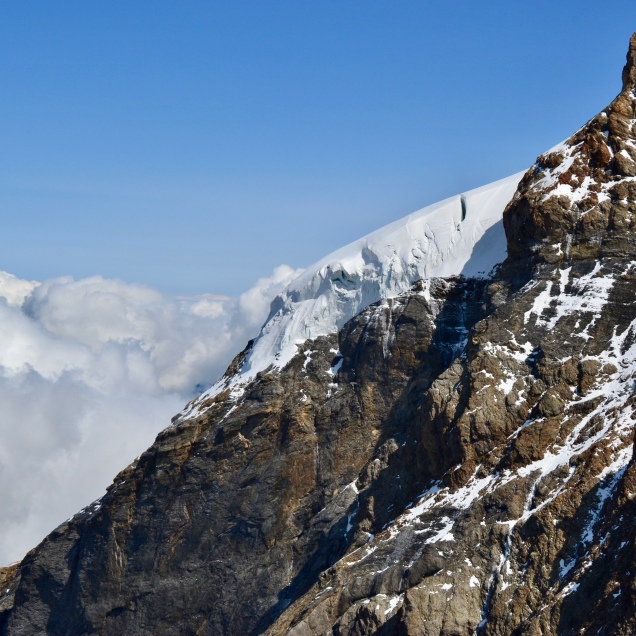 The next exhibit we explored was the Alpine Sensation. It is this life sized animated snow globe. The girls were totally enamored by it and dancing along to the music. It was really fun to watch the little town circle around while the little skiers ski down the mountain. The girls were mesmerized.

As we continued on the tour it started to become really cold. The next exhibit was the transient Ice Palace. It was created in the 1930’s by mountain guides picking and digging a tunnel through Aletsch Glacier!. Then the artist(s) carved out these lives like ice sculptors creating a mini story as you try not to fall, walkin’ on walkin’ on broken glass.…(This song is a real song). How did Elisa do it wearing heels in Frozen? Some of our favorite sculptors were the eagle, bear, and penguins. Even at minus three Celsius, they are melting. 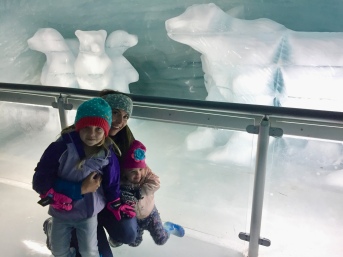 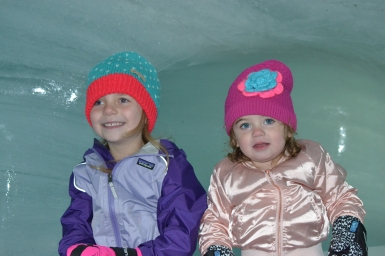 Breakfast at Airtime Cafe in Lauterbrunnen before we head over to Bern for the day!

Super cool town. Also, the Capital of Switzerland. You can feel the money that pours into the area the moment you step outside your car. All the shops are very high end and the locals are dressed dapper. Bern is on the Unesco World Heritage list which offers comprehensive protection in the event of bad weather. Bern is a small and charming – all cobbles, arcades, galleries, cafe’s and wooded slopes dating back to the 16th and 17th century, and with the town that hugs Arae River. The views from Bern outlook the Bernese Alps and some famous former inhabitants such as Albert Einstein and Paul Klee resided there. In 1905, Einstein lived and worked for the city’s patent office developing his theory of relativity. 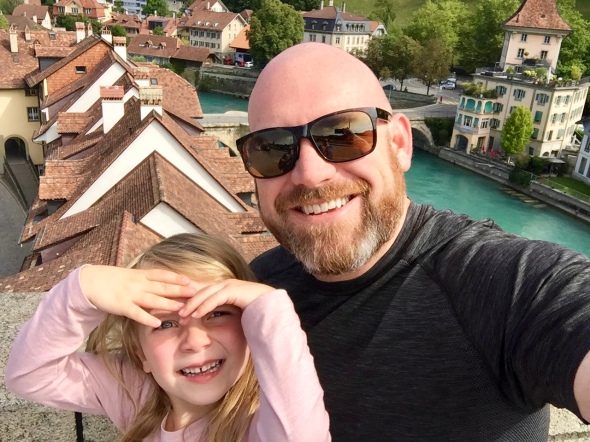 We walked up to Zytglogge, a watch made in 1405 that has mechanical moving figures on the hot and astronomical dial fresco by Viktor Surbek in 1930. The exterior appearance of the tower is dominated by late-Baroque elements. 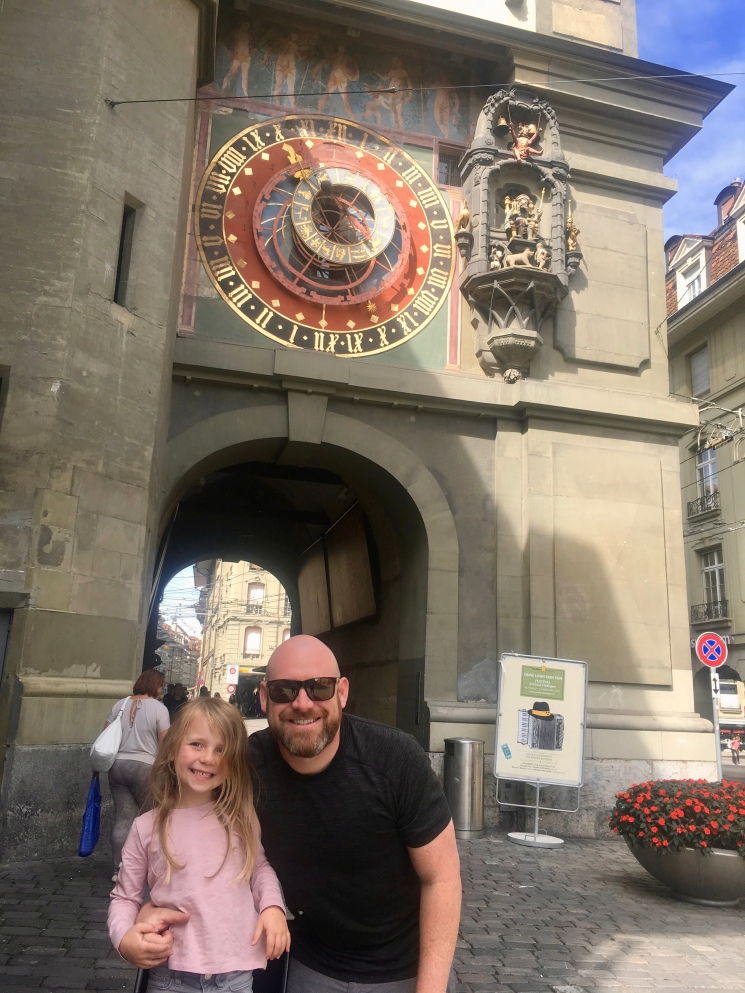 Cathedral at Munsterplatz / St. Vincent (Munster Kirche), built in the gothic era in 1421 -1893, it took over 472 years to complete, passing on numerous well- respected architects and artistic hands until completion. Its tower steeple climbs a height of 100.6 m or 330 feet. We, of course, had to climb to the tippy-top so that we could say we did it. We built the courage to push our fear of heights aside to accomplish our goal. Brian going first, Brooke and then myself carrying the sleeping baby (how convenient Kendall). It gave us an aerial view of the capital. I just absolutely loved it.

Overall, this was a magnificent trip. We really enjoyed being one with nature and getting back to hiking. We realized that was one aspect of living we really enjoyed back home. Life seems a little happier in Switzerland. I mean, why not? There is so much to offer during the summer we are thrilled to be headed back in February to ski.

“If happiness is the goal – and it should be, then adventures should be a top priority.”